Porygon is a circuit built with commodity hardware designed to automate actions on a Nintendo Switch Joycon.

For discussion or questions, use the issues page on the companion GitHub repo.

As you can see on the about me page, I was absolutely the right age to explore the magical land of Kanto when Pokémon Red/Blue came out in ‘98. I won’t remember to get a loaf of bread at the store, but I still remember burning my masterball on Zapdos and regretting it later. As video games go, those were some intensely fond memories.

So many people feel the same way as I that Nintendo did a remake called Pokémon Let’s Go. It is a remake of the classic – adding some new twists to keep things fresh, but keeping most of what I loved about it in the first place.

After buying and playing through the game, I came across a peculiar feature. Certain events in the game have random output – for example, when you trade a Helix Fossil in for an Aerodactyl, the Aerodactyl will have randomized stats. If you don’t like the stats, you can reset without saving to sort of go “back in time”, to right before you handed over the fossil. And then you roll those sweet dice again.

Another such place is for farming “Gold Bottle Caps.” These are rare items that you trade to an NPC, and in exchange he improves whichever Pokémon you give to him. The only place these spawn (outside of scripted in-game events) is in a building called Rocket Corner. You can pick up the items and, if you want, use the soft-reset trick to try again. Eventually, you’ll get the rare one you want.

I thought that, if any task in this game were automatable, it would be that one. So while this methodology will generalize to other JoyCon based inputs, the task at hand here is to farm Gold Bottlecaps automatically.

“The device” is conceptually easy to understand: 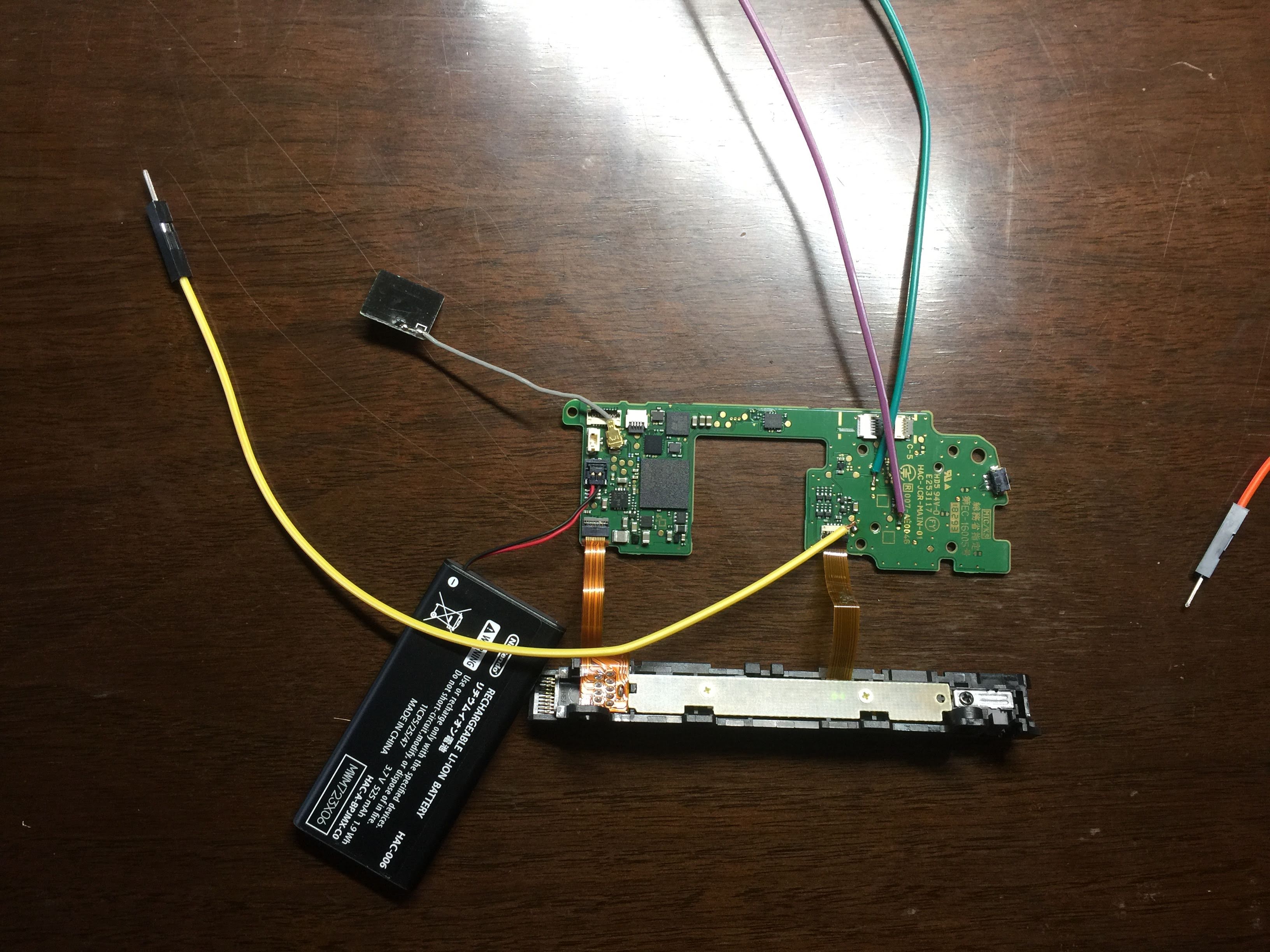 This project starts with a pretty steep barrier to entry. The above picture shows the PCB for a right JoyCon, as manufactured in 2018. You can fit a penny inside the rectangular hole in the center – and what you’re soldering to is way smaller than that.

First, pair the joycon with your switch. It’s harder to do once you’ve taken things apart :).

Then, you’ll need to access the main PCB. The inside of a JoyCon actually has a lot of other stuff in it. There are some tear-down videos on the web, but it’s pretty easy to figure out. You’ll see that I left two ribbon cables, connecting the PCB to the sliding assembly. We’ll need those for access to the Reset button and also to power the main board. You’ll also need an uncommon tri-wing screwdriver. There are repair kits on Amazon which have one.

At this point you may want to play around with the test points. Taking a jumper wire, you can join COL with A/B/X/Y to simulate a button press. This will actually do stuff to the console it’s paired with! Assuming your battery has any charge.

Using the pinout on dekuNukem’s repository, you need to solder jumper cables to all the test pads POTX, POTY, A, B, X, Y, COL, and HOME. Home is missing on the pinout – it’s the circular pad to the west of the bottom philips head screw of the joystick.

Soldering to such small equipment is difficult. And if you apply too much heat, the copper pads will pop off the PCB, and you won’t be able to use it in your circuit! I went through a lot of joycons that way. So here is some soldering advice:

These joints are seriously delicate. Don’t apply any more stress to them than necessary for moving them around and plugging them in to the breadboard.

On the bottom of the slider assembly, there are 10 pins. Connecting pin 4 to 5V and grounding it out through pin 1 will power the whole PCB. 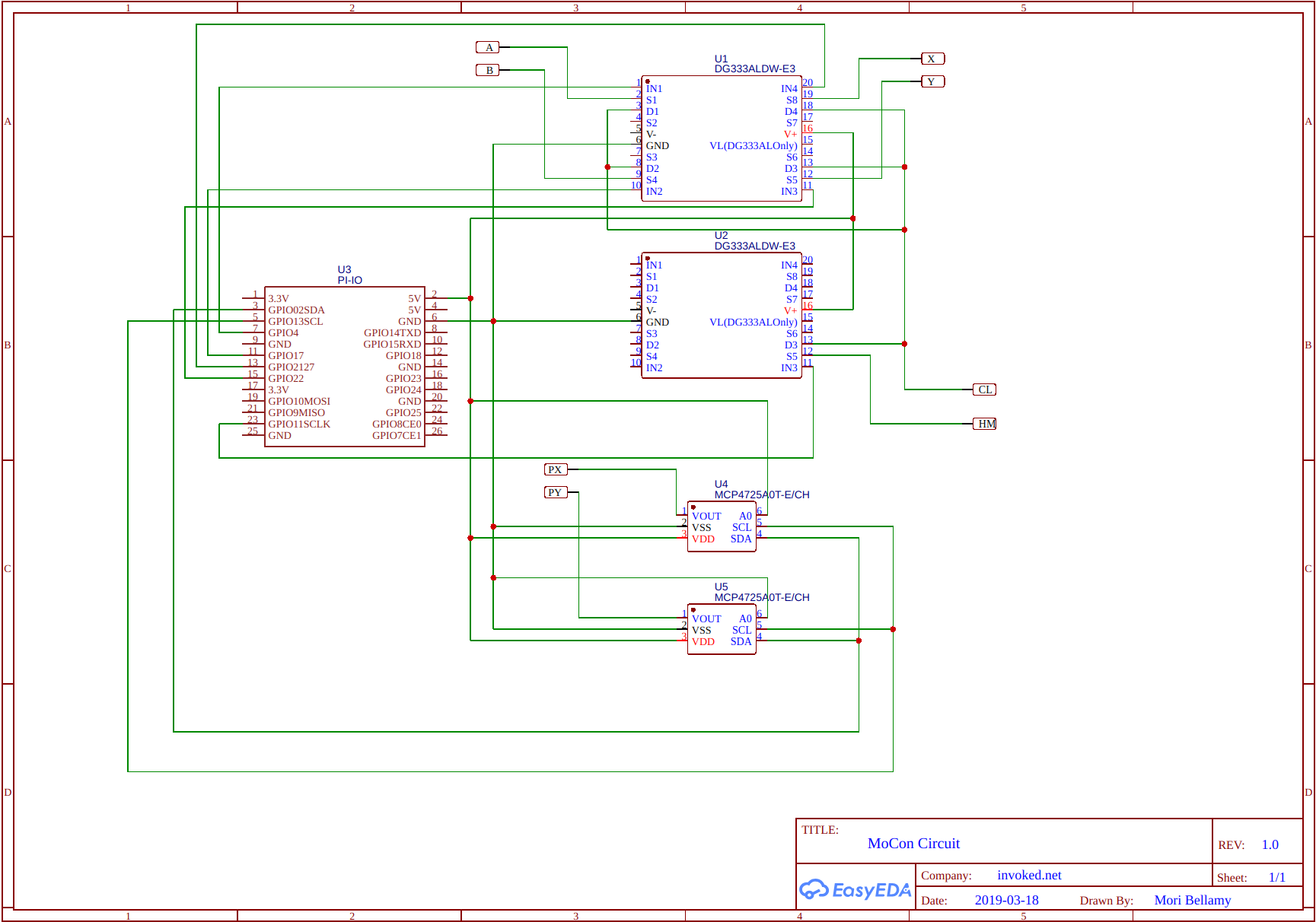 Now that you have a joycon with jumper wires sticking out of it, you can start to stimulate the circuit to emulate button presses. Here is the high level idea for the implementation:

You’ll notice that the PI is powering all of the digital components. A separate power supply would really help. In my home setup, I noticed that a certain plug was delivering dirty power, which resulted in a bunch of button presses that I didn’t intend. Putting a capacitor across the rails of my circuit seemed to help, but really, the PI just isn’t designed to be a reliable power source.

While the circuit diagram is pretty to look at, my implementation is something else entirely: 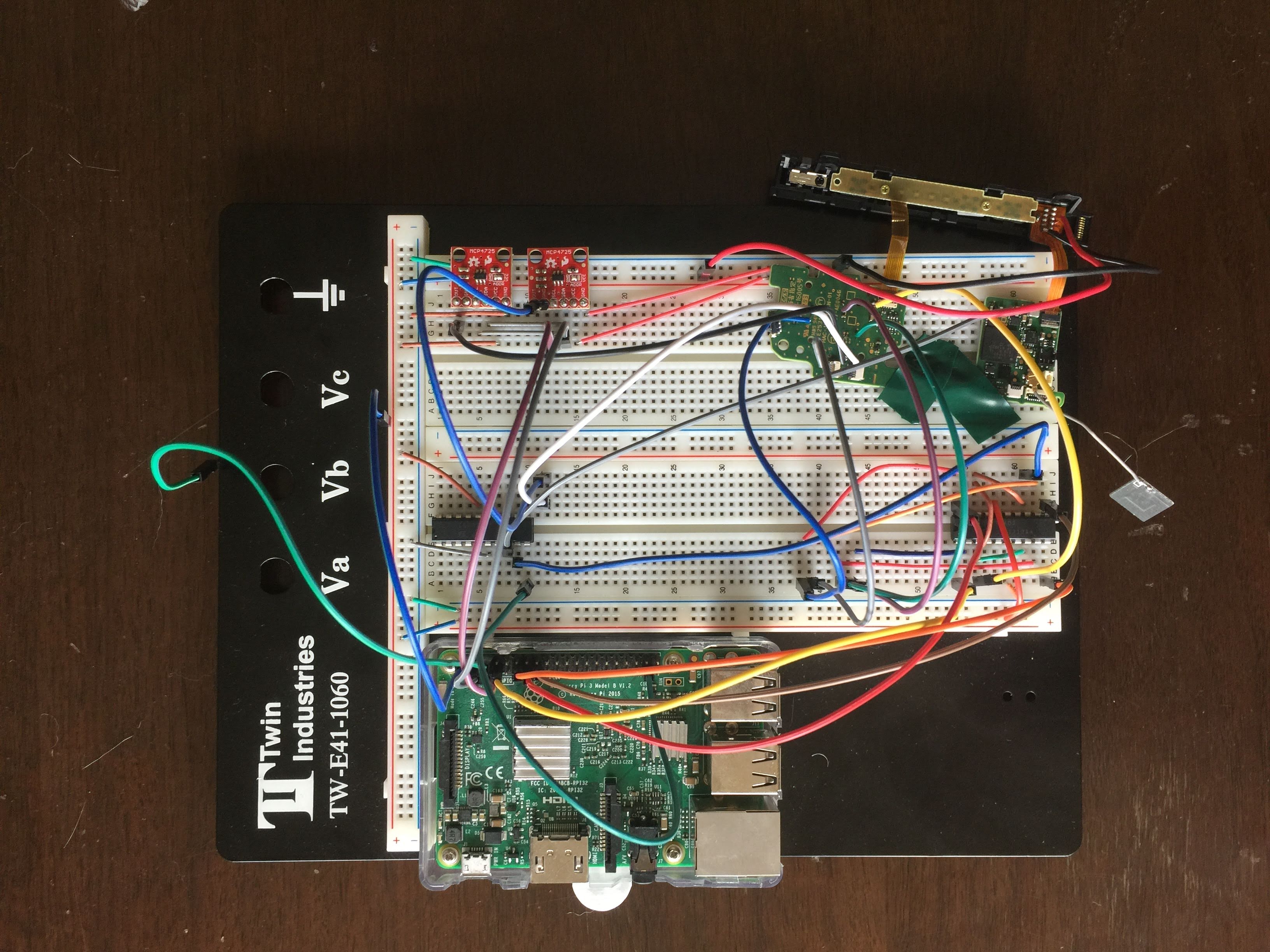 Now that the custom circuit is ready to go, you just need the raspi to drive it. If you’ve followed along with the setup above, you can use my repo with minimal changes.

Update config.ini as needed, and power on your circuit and see if things work.

Either now or later, you might run in to issues with the joysticks. The controller needs a baseline voltage on POTX and POTY to register as “joystick untouched, it’s in the middle”. Roughly, its .8V for “center”, less and more being a tilt in either direction. But if you followed my instructions, the baseline voltage to the DACs is variable! For example, I have to adjust the numbers depending on if my USB port is in use! In config.ini…

Use a number here between 0 and 4095, each representing a voltage between GND and VCC (which in my above circuit is 5V).

Now you can drive input from your raspi based on a script! All that remains is to decide what to do. Picking up 6 items in Rocket Corner is easy enough. I just did some trial and error for how long to go left, right, up, and down to get to each item. But how will I know to save the game when I get the desired result, as opposed to doing a soft reset and trying again?

I’m somewhat surprised, but still pleased, to report that a webcam + OCR is sufficient here. 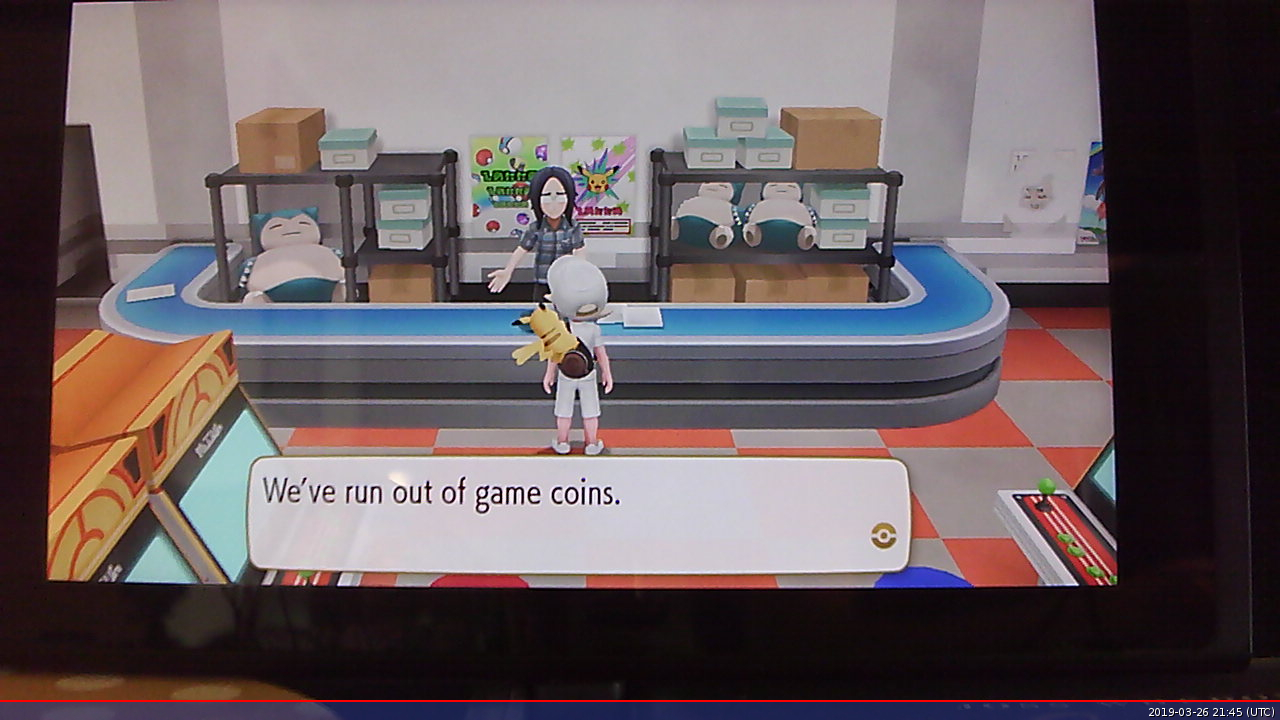 You’ll need to rig up a sort of “studio” to grab screenshots of the switch. I used DVDs on either side of the USB-C power input to prop up the whole console, and I put a webcam in front of that. Plugging the webcam into the PI, you can install and run fswebcam to snap a picture!

But then how can you read it? Run tesseract on to your PI! Google maintains a debian release that, for me, installed without any problems. After installing the debian, install some python bindings:

And finally, tell the driver script the top-left coordinates of the dialog box for your studio:

And then the magic can happen :). read_cropped_image() will start converting the game image to text. driver.py uses that to figure out if a restart is needed.

Pulling it all together

Move your character to the entrance of rocket corner, then run

to farm those Gold Bottlecaps. You’ll be a Pokémon master in no time ;).